The last of the big three BBC winter schedule Victorian fantasy dramas dropped this week, with the epic three-part miniseries Dracula written by Sherlock and Dr Who team Mark Gatiss and Steven Moffat which concluded last night. And I have to say, I think the Beeb left the best until last. Following the reimagining of The War of the Worlds and A Christmas Carol, Dracula was, as to be expected of its writers, enormous fun to watch; not as politically correct as The War of the Worlds, not as emotionally deep as A Christmas Carol, but much more entertaining, which is what we expect of a good horror story. And Dracula is the most iconic horror story of all, equalled only by Frankenstein, both monsters representing the major gothic archetypes. The vampire’s bite turns the victim into the other, while in the Frankenstein myth – a variation of the Faustian ­– otherness comes from obsessive knowledge and mis-applied rationality: attacks from without and within. Both these nineteenth century gothic novels have therefore been multiply adapted to the point of cliché. As with Stephen Knight’s recent revision of A Christmas Carol, the challenge for the writers is to retain the essence of the original, while bringing something genuinely new to the table; fresh blood, so to speak.

In this sense, the new Dracula more than delivers. Filmed at Bray Studios, the drama’s debt to Hammer is obvious, and there’s a lot of Christopher Lee in Claes Bang’s interpretation of The Count, as well as an obvious nod to Bela Lugosi, even quoting his ‘children of the night’ speech at Reading Cemetery. The drama is an intertextual playbook of genre-savvy references to other iconic Draculas; in the climax, Van Helsing even recreates Peter Cushing’s charge along a table to open the drapes from the original Hammer Dracula (1958). But just as the new Dracula wrong foots us by not following through with the expected outcome – Dracula does not burn – it plays a similarly elegant game with Stoker’s original novel. Episode One stays reasonably close for a start, with lawyer Jonathan Harker dispatched to the castle of his firm’s eccentric and reclusive client, who is buying property in England. What’s different is the framing narrative, in which the revenant-like Harker is interviewed by Sister Agatha Van Helsing, Gatiss and Moffat pulling a Dr Who move by brilliantly reversing the gender of Dracula’s nemesis. This allows the new Van Helsing story arc to develop, while switching between the Harker who arrives fresh faced at the castle and his ghastly present condition, the horror reaching a dark epiphany when he realises that he’s not breathing. Dracula soon arrives at the convent, and his joust with Van Helsing begins…

From the moment he appears on screen, Danish actor Claes Bang is perfect as Dracula, his European charm reminiscent of Frenchman Louis Jourdan’s portrayal of the character in the 1977 BBC version of the original novel, which was apparently a huge influence on Gatiss. Like Jourdan’s Dracula, Bang is close to Stoker’s original vision: an old man who becomes younger as he feeds, but not too young; a debauched middle-aged aristocrat, slightly over-ripe but sexually magnetic, something Gary Oldman’s 1992 steampunk Dracula failed to achieve. (One might also recall Jack Palance’s interpretation in the 1973 CBS adaptation directed by the creator of Dark Shadows, Dan Curtis, and scripted by veteran horror writer Richard Matheson.) There were perhaps a few too many anachronistic one-liners for my taste, but these settled down after the first episode while I appreciate that making Dracula a bit Freddy Krueger was likely to resonate with a twenty-first century audience. Dolly Wells, meanwhile, as Van Helsing, was superb. Bang was good; she was better. Her Van Helsing, in both incarnations, owned this production as far as I’m concerned. As a jobbing British actress with a solid but unremarkable television career, I anticipate that her star will now be rising.

Another strength of the first episode was its exploration of some of the darker implications of Stoker’s novel that the great man had not explored. For example, there is the baby victim. This is hinted at in he novel, but Gatiss and Moffat follow the idea to its conclusion, birthing an undead baby. Similarly, they extend the horror of falling prey to Dracula, by depicting his victims as essentially zombified, rotting but conscious, frequently buried alive; the thought is hideous, and modern special effects make it flesh. These tragic figures are much more like the ghoulish vampires of European folklore, before Polidori’s Byronic Lord Ruthven ushered in the concept of the aristocratic bloodsucker, which Stoker then cemented in popular culture forever. This is a recurring device in the new drama, linking with but reimagining episodes from the novel, most notably around the updated fate of Lucy Westernra.

Episode Two continues to reference the novel, this time devoting the entire ninety minutes to the voyage of the Demeter, the ill-fated ship that brings Dracula to Whitby. In the original, the ships arrives with no crew and the dead captain lashed to the wheel, his log telling the tale of the gradual disappearance of his crew. Gatiss and Moffat pick this quite short, almost diegetic section of the novel and build a drama out of it so complete it could be a stand alone narrative. Here, the period gothic mise-en-scène of Part One is beautifully realised, this time with a lot less punning and gallows humour, except for the obvious nod to Inside No. 9 by Gatiss’ mates Reece Shearsmith and Steve Pemberton. (But this is the kind of thing horror nerds love nowadays.) Having cut the mooring line with Stoker’s narrative while retaining the essential premise of the voyage, we have no idea what’s going to happen next and the pace is relentless. There’s even a ‘Lord Ruthven’, though this seems a throwaway reference. In the episode’s climax, Dracula walks ashore to be fixed in a helicopter spotlight. Like Sherlock, he’s about to be updated.

Speaking personally, the final episode was disappointing, though making Lucy a libertine millennial was an interesting move. In modern Britain, Dracula suddenly felt a lot more like Tom Ellis’ Lucifer in the show of the same name, and the writers should have perhaps remembered that what killed off the Hammer Dracula series was updating the character to the present day in an attempt to stay relevant in the wake of new wave American horror films like Night of the Living Dead and The Texas Chainsaw Massacre, a move Christopher Lee loathed. The Jonathan Harker Foundation, meanwhile, felt far too much like Torchwood. Only Van Helsing saved it, in a nice move that saw her spirit merging with her doomed descendant, Zoe. And after all that promise, the ending felt sudden, sentimental and rather underwhelming. Having put so much energy into living forever, why would Dracula give in so easily? OK, this cute little double suicide brings Dracula and Van Helsing together, which suits them as doppelgängers, while subverting expectation by not ending with a stake through the heart or direct sunlight for the millionth time. This was a Dr Who ending though, and they tend to be overwritten and maudlin. I imagine viewers and critics will be split over this, seeing something either beautiful and romantic or profoundly unsatisfying. That said, this remains an impressive piece of television, and likely to go down as a classic Dracula. I just hope there are no plans for a series, because that would be tacky, but no doubt very popular, again like Lucifer or, indeed, Sherlock.

With Dracula, Gatiss and Moffat once more demonstrate that they are masters of the modern gothic. Their track records in this genre speak for themselves, with Moffat’s tenure at Dr Who producing by far the best stories and Gatiss’ resurrection of the Christmas ghost story with Crooked House and his lush M.R. James adaptations. Like me, they obviously grew up in the 1970s with House of Hammer Magazine, Lawrence Gordon Clark’s Christmas ghost stories, and late-night horror films on BBC 2. All this and more informs their work. It must be a wonderful feeling to take your place alongside these glorious icons of British horror. Good luck to ’em. The bastards. 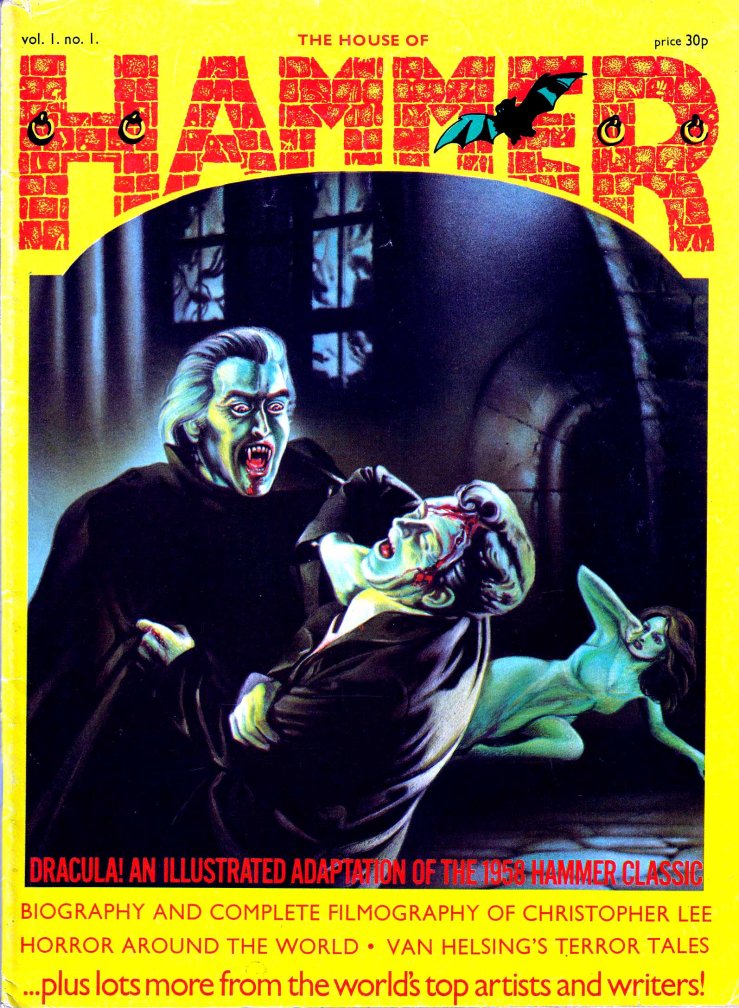