Oliver Onions did not believe in ghosts. Nonetheless, as a prolific author of popular fiction across genres in the first half of the twentieth century, if he is remembered at all these days, it is as a writer of startling and original ghost stories. Historically, these were not easy to find, until they were reissued by Wordsworth as part of their ongoing series of ‘Tales of Mystery and The Supernatural.’ With a detailed introduction by David Stuart Davies, The Dead of Night: The Ghost Stories of Oliver Onions is by far the most comprehensive single collection of Onions’ gothic fiction to ever see print, and it is long overdue. It brings together twenty-four stories from Onions’ three supernatural collections, Widdershins (1911), Ghosts in Daylight (1924), and The Painted Face (1929), including uncollected material and stories omitted from the 1935 Nicholson and Watson omnibus. There is also the author’s fascinating ‘Credo,’ written for the 1935 collection, in which he explained that he was not interested in the ‘traditional apparatus’ of the ghost story, but of what he called ‘far subtler terrors.’ Why must we merely see a ghost, he wondered: ‘May not his proximity be felt and his nature apprehended in other ways?’ (Onions: 2010, 3). 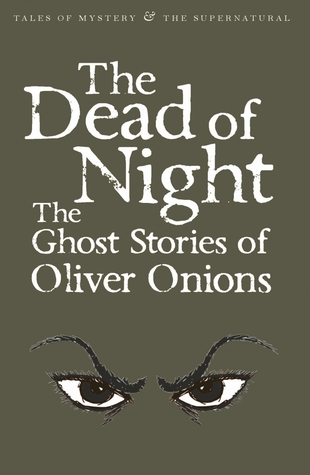 Oliver Onions (1873 – 1961) is one of those writers that got lost over time. Every generation has them; bestsellers that for whatever reason do not survive their own eras. The literary historian Malcolm Elwin called such writers ‘wallflowers.’ Rightly or wrongly, Onions is an Edwardian wallflower, probably because popular and genre fiction rarely achieves the critical hallmark of ‘literature,’ while the period in which he was active undoubtedly belongs to the Modernists. Exposure thus becomes limited, and, war poets excepted, the more notionally conventional writing of the Edwardian and Interwar mainstream is quickly overwritten by the ‘luminous halos’ of experiment and revolt. Onions is somewhere between the two positions. He was thematically experimental, subversive even, but not narratologically so, writing in a commercial style essentially rooted in the Victorian realist tradition.

When seeking to find a correlative, one often reads that H.P. Lovecraft was an admirer, particularly of Onions’ most famous story, ‘The Beckoning Fair One’ (which opens the Wordsworth anthology), thus uniting the two authors under a marketable brand. This claim can be traced back to the 1971 Dover edition of the Collected Ghost Stories, after which it becomes rather vague. There are only a couple of mentions of Onions in Lovecraft’s published correspondence. ‘I hope eventually to have a sniff at the new Onions opus’ he writes to August Derleth on November 1, 1930, referring to The Painted Face, but the subject does not come up again (qtd. in Schulz and Joshi: 2013, 283). Onions appears in the Lovecraft papers once more in a letter to the horror writer J. Vernon Shea in 1936, when he writes of Ghosts in Daylight that ‘I didn’t care much for the various tales’ (qtd. in Joshi: 2002, 108). Neither is Onions cited in Lovecraft’s essay ‘Supernatural Horror in Literature,’ which contains praise for his four designated ‘modern masters’ of horror: Algernon Blackwood, Lord Dunsany, M. R. James, and Arthur Machen.

Yet in assessing Onions’ work, this should not matter…

To buy the The Dead of Night: The Ghost Stories of Oliver Onions please click here

Vintage is the new black