On the 168th anniversary of the wreck of Her Majesty’s Troopship Birkenhead, which I once wrote a novel about and am now planning a history of, here’s the true story…

In the winter 1851, Her Majesty’s Troopship Birkenhead laid at anchor at Portsmouth, awaiting orders. A world away, the British Empire was fighting its third frontier war with the horseback Basuto tribesmen of South Africa, who were about to inflict a disastrous defeat on an ill-prepared British force led by Sir George Cathcart at the Battle of Berea on December 20. Cathcart needed reinforcements, and the Birkenhead’s captain, the dour Scot Robert Salmond, received his orders. He was to transport a large company of officers and men from several regiments to the Royal Navy Base at Simon’s Town, on the Cape Peninsula. And from there, up country to Algoa Bay at Danger Point near Gansbaai, 90-odd miles from the Cape Colony near a stretch of water that has since become known as ‘Shark Alley’.

An ironclad steamer displacing a couple of thousand tons, originally commissioned from John Laird as the frigate Vulcan, the ship had been hastily reclassified a troop carrier after parliamentary resistance to increased investment in iron over wooden warships. She left Portsmouth on January 3, 1852, carrying detachments from the 12th Foot and the 12th Lancers. On the 5th, she docked in Cork Harbour, taking on fresh water, meat, and coal, civilian passengers, and an additional 415 soldiers, including the senior military officers Major (soon-to-be Lieutenant-Colonel) Alexander Seton and Captain Edward Wright. Seton was an intellectual who had never fired a shot in anger, Wright a seasoned campaigner. The men on board belonged to the following regiments:

As was customary, there was also a small contingent of Royal Marines. On January 7th, the ship left Cork, heading for Simon’s Town. There were now 643 souls on board, including crew, non-military colonial personnel, servants, and the wives and children of officers already stationed at the Cape. In just under two months, 450 of them would be dead.

The ship steamed almost immediately into a savage Atlantic storm. For ten days, Salmond battled the elements, and when the weather finally broke and Seton and Wright observed their exhausted charges, they realised that these mostly raw recruits from England, Ireland and Scotland were not ready for the frontier. They used the remainder of the voyage to train these young working-class men, drilling them on deck until they were a disciplined fighting force.

After an otherwise uneventful journey, the Birkenhead arrived at the Cape Colony on February 23; now within two days of her final destination. She resupplied, and two days later, the Birkenhead steamed out of Simon’s Bay at 6.00PM. Just before 2.00AM on the 26th, she struck an uncharted rock about three miles off Danger Point and went down in twenty-two minutes.

On the lower troop decks, 150-odd men drowned in their hammocks as hundreds of tons of water screamed into the stricken hull, the original watertight compartments having been cut open to allow troops to move freely when the ship had been remodelled as a transport. As survivors of the collision struggled to reach the main deck and officers assessed the damage it quickly became apparent that there were not enough lifeboats for everyone. And several of those they did have were welded to their housings by rust and paint. To make matters worst still, Salmond gave the disastrous order to ‘Reverse Full’ in the hope of getting free of the rock. Below decks, engineers and stokers watched in silent horror as the starboard bilge plates tore like newspaper and the sea exploded inward, killing all but two, extinguishing the boilers and dooming the ship.

As soldiers and seamen laboured at the huge chain pumps or worked furiously to free the boats, Seton called a drummer boy to him and beat assembly. Those men not actively involved in the evacuation of the civilian passengers who could still stand came to attention on the tilting deck as best they could manage, half of them wrapped in blankets or barely clothed at all. And there they stoically remained, although preparing for battle, while the women and children were got away in the handful of functional boats.

At about 2.20, the ship finally succumbed to the weight of water upon her. With a terrible wail of rending iron and an almighty crash, her bow broke clear away at the foremast and disappeared beneath the waves with a sound like steam venting, taking the sixty men at the pumps with it to the bottom. The ship lurched forward on the rock that still held her, the stern lifting violently and knocking the bulk of the men off their feet. Those not nimble, quick-witted, or able enough to grab onto something followed the wreckage into the water. Their desperate cries for assistance that would never come were terrible, and it was a mercy when they ceased.

The shock was too much for Salmond. He lurched to his feet and cried out, ‘Save yourselves! All those who can swim, jump overboard and make for the boats. That is your only hope of salvation.’

The soldiers fidgeted uneasily, no doubt wondering if they should break ranks and try for it. Seton raised his hand for silence. ‘You will swamp the boats containing the women and the children,’ he said. ‘I implore you not to do this thing, and I ask you all to stand fast.’

Ask. He did not order them to stand. The last of his officers moved forward, echoing the request. Stand fast. Not a single man moved.

‘God bless you all,’ said Seton. And then the ship sank. He was never seen again. Salmond was spotted swimming but was struck on the head by wreckage and went under before anyone could get to him.

About 250 men went into the water. And then the sharks came. Fewer than half lived through the night. To this day, locals still call the great whites ‘Tommy Sharks’.

Ensign Alexander Russell of the 74th (Seton’s Regiment) survived the wreck and was picked up by one of the ship’s cutters under the charge of one Able-Seaman John Lewis, who was pulling as many men out of the water as he could. When Lewis saw another man struggling in the water but was fearful of adding any more weight to the perilously overloaded boat, Russell insisted that the man be taken on board, taking his place in the water. Within five minutes a great white shark dragged him under.

The lifeboats stayed together until a sail was sighted at dawn and they became separated trying to row towards it. The boat commanded by ship’s surgeon Dr Culhane pulled for the shore instead, but the coastline was too rocky and dangerous to land. They rowed fifteen miles to Port D’Urban, where Culhane borrowed a horse and rode a hundred miles across hard country to Cape Town to raise the alarm. He arrived twenty-four hours later, by which point all survivors had either made their own landings, been rescued, or died. Culhane was the first to alert the Naval Command at the Cape, and HMS Rhadamanthus was dispatched to the wreck. The ship that Culhane could not reach was the British schooner, Lioness, which had subsequently tacked and started moving back towards the other lifeboats. The Lioness then made for the wreck and rescued 116 men who had been strong enough to hold onto the mast through the night and morning. The rescuers told dreadful tales of body parts and mutilated corpses littering the sea for miles, often with pale shapes beneath them, feeding.

Captain Wright survived. Using a broken section of deck as a makeshift raft he saved fourteen men from the water. This group got ashore at Danger Point, and soon joined up with other survivors scattered along the coast. Wright organised these men and, knowing the country, marched them out, eventually finding help at a farm at Sandford Cove, twenty or so miles away. Wright then commandeered a whaling boat and returned to the wreck to search for more survivors, saving two more men.

At the Naval Court Martial that followed the disaster, held onboard the HMS Victory, Wright told the court:

The order and regularity that prevailed on board, from the moment the ship struck till she totally disappeared, far exceeded anything that I had thought could be effected by the best discipline; and it is the more to be wondered at seeing that most of the soldiers were but a short time in the service. Everyone did as he was directed and there was not a murmur or cry amongst them until the ship made her final plunge – all received their orders and carried them out as if they were embarking instead of going to the bottom – I never saw any embarkation conducted with so little noise or confusion.

Like many others, Wright felt that the lifeboats should have stayed by the wreck, shuttling survivors to shore. Despite this view, all officers, living and dead, were exonerated by the subsequent Court Martial, even Salmond, who in hugging the coastline too closely had almost certainly caused the disaster.

But the real story belonged Seton and his men, who, by their collective action, had turned a senseless and easily averted catastrophe into something tragic and noble. Not one civilian life was lost. It was thus in the interests of the Crown to focus upon them, rather than the reasons why. The British Army does not like disasters, any more than the Royal Navy, and in a somewhat familiar move, the rhetoric of Agincourt was invoked by generals and admirals, and press and politicians alike: of the iron courage of the tiny island nation against overwhelming odds; as they would do again for the Charge of the Light Brigade and the battle of Rorke’s Drift. The Birkenhead soldiers became martyrs, who defended the Empire’s honour as surely on that deck as if they stood in battle or siege. Thackeray gave speeches on their heroism, Sir Francis Doyle and Kipling celebrated it in verse, and Thomas Hemy in epic narrative paintings. Memorials were erected in hospitals and churches, with Queen Victoria taking a personal interest. A new maritime protocol, nick-named the ‘Birkenhead Drill’, was adopted, in which women and children would always be evacuated first.

Not until the loss of the Titanic did another shipwreck so totally capture the public imagination. And now, like the ship herself, this remarkable story of courage and sacrifice has been lost in the cold darkness of history. 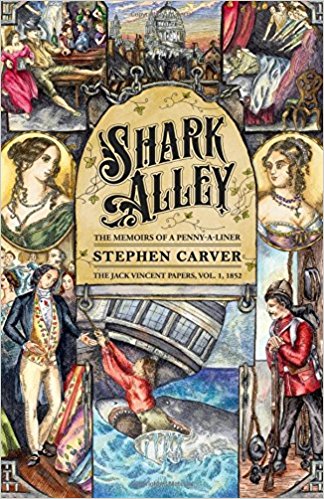 You can read a full account of the wreck of the Birkenhead and the subsequent court martial in my book Shark Alley, available here.

1 thought on “The Victorian Titanic: The Last Voyage of the HMS Birkenhead”